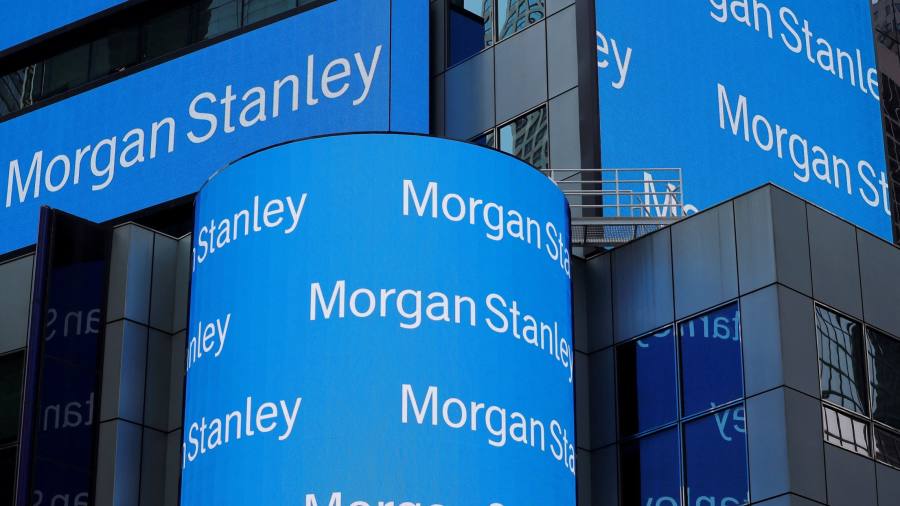 Overall, Morgan Stanley reported a 40 per cent year-on-year drop in net income to $2.2bn, but the results on Tuesday for earnings of $1.26 a share exceeded analysts’ estimates of $1.19.

The numbers also highlighted the impact of chief executive James Gorman’s efforts to diversify into wealth and asset management. So far, amid difficult markets, he has only partially succeeded in providing a counterbalance to highly cyclical investment banking earnings.

But investors have cheered the approach, helping to open up a stock market valuation gap with longtime rival Goldman Sachs, which also reported earnings on Tuesday.

Morgan Stanley shares were up more than 7 per cent in morning trading.

The company’s results included $133mn to fund about 1,800 job cuts, about 2 to 3 per cent of the company’s workforce, that the bank made late last year. Chief financial officer Sharon Yeshaya said that no further lay-offs were expected unless the economy worsened. “We’re comfortable with our position,” she added.

Investment banking had another challenging quarter, with Morgan Stanley’s revenues falling 49 per cent year on year to $1.25bn, in line with analysts’ estimates of $1.2bn. Rivals JPMorgan Chase, Bank of America and Citigroup on Friday reported that investment banking revenues in the latest quarter more than halved from a year ago.

The drop underscored the difference from 2021, when Morgan Stanley and rivals raked in revenue from advising on mergers and acquisitions and new stock market listings. Such activity slowed dramatically in 2022.

Revenues in wealth management, which includes online trading platform ETrade, were up 6 per cent to more than $6.6bn. But investment management, including Eaton Vance following Morgan Stanley’s acquisition of the money manager in 2021, was hit by falling markets that cut assets under management. Revenues dropped 17 per cent to $1.5bn but topped analyst estimates of $1.3bn.

“As we approach 2023, we do so with quiet confidence, recognising we have a line of sight with the durability of our wealth and investment management businesses,” Gorman said on a call with analysts. “I feel good about where the whole package is.”

Trading results were substantially weaker than analysts expected, with net revenue of $3.6bn. Fixed-income trading had its best year in a decade but equity numbers were dragged down by an unflattering comparison with 2021, when the bank booked mark to market gains. By comparison, JPMorgan trading revenues were up 7 per cent and Citi’s were also up, by 18 per cent.

Gorman and Yeshaya highlighted the bank’s 15.3 per cent common equity tier one capital ratio, which they said gave the bank the flexibility to continue share buybacks, increase its dividend and take advantage of opportunities once the economy improves. “When markets rebound, we will capitalise on growth,” Gorman said on a call with analysts. “It’s a great position to be in.”

The chief executive also said the improving margins in wealth management, which hit 29.2 per cent in the fourth quarter excluding integration expenses, were approaching the company’s goal of 30 per cent. That helped the unit generate $6.6bn in pre-tax profits in 2022. Longer-term, Gorman said the company was seeking to increase client assets, which stand at $5.5tn at present, by $1tn every three years.

Gorman said he was “pretty confident” about the economic outlook and expected the US Federal Reserve to stop raising rates some time later this year. “When the Fed pauses, underwriting activity will pick up.”